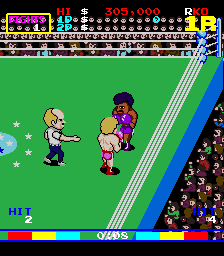 Ring King, known in the PAL regions as King of Boxer, and known in Japan as Family Boxing (ファミリーボクシング Famirī Bokushingu), is an arcade boxing game originally developed and published by Woodplace, Inc. in the PAL regions in 1985, and later published by Data East in North America the same year. The game continues the series' theme of comical sports as the player takes the role of a boxer who makes his way from his debut to become a world champion. Ring King, though perhaps unintentionally, is standard of the boxing creations of its era, via providing quirky monikers for opponents the player encounters; in its arcade release, these number eight (8): Violence Jo (ironically, this entry level fighter is the champion, in the NES version), Brown Pants, White Wolf, Bomba Vern, Beat Brown, Blue Warker (reigning champion, in the arcade version), Green Hante and Onetta Yank. Assuming the player wins the championship, arcade play continues cycling through only the last of the afore-listed three (Blue Warker, Green Hante, Onetta Yank). The player can choose from several different types of punches and defensive maneuvers, along with unique special attacks. The player revives their stamina during the round interval by pressing the button rapidly. The boxer's abilities are determined by three different stats; punch, stamina, and speed. The player can improve these stats using the power points gained after each match. Performing well in matches allows the player to create more powerful boxers. The player can save their game progress by recording a password, and two players can face off against each other in the two-player mode. Though the game is rudimentary, it is possible to counter-punch, and missing with too many punches causes the boxer's stamina to decrease. The biggest characteristic of the game is the comical set of special attacks. These moves are activated when the player presses the attack button at the right timing and at the right distance. The attacks have the capability to instantly knock out the opponent, but being countered before a special attack causes an extraordinary amount of damage as well. The first special attack is a powerful hook which the boxer throws by spinning around like a top. The second is a straight punch that propels the opponent into the ropes when it connects. The third type is an uppercut that launches the opponent straight into the air. If thrown at the right timing, the uppercut can blast the opponent straight out of the ring, resulting in a technical knockout.

Ring King is a boxing game in which the action in the ring is viewed in a 3D top-down view and a full range of moves is provided, with the standard jabs complimented by body punches and the ability to dodge, duck or raise your guard.

Each punch weakens your opponent's strength which can slightly recover during a round break. A rain of well placed blows can produce a quick knockout, but normally you must hit your opponent many times before he goes down.

The game has three play modes. There is training mode to train your player before you enter a tournament. A ranking mode where you can select one of the three championships, Rookie, Japan and World. Each championship can be played at five difficulty levels. The third mode is the tournament mode. To reach the number one spot in the ranking or tournament mode you must train your boxer well.

Before you start you must create your character and set his initial abilities, strength, speed and stamina. Each won bout increases these abilities slightly. The abilities of your opponent and you are visible in the status bar at the top of the screen during the game. Strength is represented with a boxing glove, speed with a shoe and stamina with a dumb bell.

This game can be played by one player against the computer or by two players against each other. A password is given after each won bout and it enables you to continue with the next match in a tournament at a later time.